Phytoestrogens, Naturally Occurring Plant Estrogens, the Ones to Avoid that cause Menorrhagia

Just because something is natural does not mean it is good for you or harmless. Toadstools are natural, but those mushrooms are poisonous. Fibrocystic breast disease may also be provoked by some plants, foods and herbs. The therapeutic effect of Natural Progesterone may also be blocked by some herbs.


How to avoid Bad Phytoestrogens

Plants produce chemicals that mimic estrogen and/or block estrogen, and/or block progesterone. The human body has receptors to both estrogen and progesterone. These receptors will respond not only to the body's hormones, but also plant hormones. In general, phytoestrogens are thought to wash out of the body within several days in contrast to months or decades that the synthetic chemical xenoestrogens take to be excreted. Whole grains, fruits, seeds, beans and herbs all are know to have estrogen and/or progesterone activity. The most famous is soy. In general, any food that has been eaten by a culture or people group for centuries is probably all right to eat if the people group in question is relatively free from these estrogen related diseases. When referring to phytoestrogens, it is generally thought that a "weak" estrogen may actually be protective against cancer causing xenoestrogens. The best example is Lilian Thompson PhD's work that showed that oral ground flax seed reduced breast cancer size between the time of diagnosis and surgery. The phytoestrogen contained in the flax seed binds to the progesterone receptor, but does not stimulate it. The flax seed phytoestrogen competes with other estrogens that would otherwise stimulate the estrogen receptor. The flax seed phytoestrogen acts as a blocker. In contrast, a strong phytoestrogen may actually make the disease worse. Again the list that follows is incomplete because of the lack of research money and interest:

Coffee is a known phytoestrogen that exacerbates fibrocystic breast disease. Since it is a phytoestrogen, decaffinated coffee may still be able to act as an estrogen.

In the 1940's, the sheep farmers of Perth in western Austrailia began to experience an 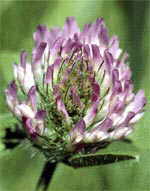 epidemic of still births despite three seasons of exceptionally good weather. The handsome merino sheep looked healthy. However, the ewe's failed to go into labor; the lambs died in still birth and often the mothers as well. In a matter of 5 years, the ewes failed to conceive at all even after repeated breeding with fertile rams.

Federal and agricultural specialists found the problem. Clover. Fifteen years earlier, ranchers had imported a clover from the Mediterranean region in Europe. The first scientific paper on this phenomenom appeared in the Austrailian Veterinary Journal in 1946 and proclaimed this as "clover disease". Three years later three chemicals were identified as suspects. Finally, formononetin only one of the chemicals was determined to be the culprit. Formononetin mimics estrogen.

Coumestrol found in sunflower seeds when fed to the mother rat caused permanent reproductive problems in the rat pups: female pups when grown did not ovulate, and the male pups had altered mounting behavior and fewer ejaculations. Neonatal rats and immature rats exposed to coumestrol had premature estrous cycles. Flax seed oil and Soy oil are known NOT have the active phytoestrogens. Sunflower oil MAY or MAY NOT have active hormone components in it.

Used in the ancient world to prevent pregnancy and precipitate abortions.

Zava, PhD showed that these herbs stimulated estrogen receptor positive breast cancer cells to grow. Red Clover and Yucca were found to be equal in potency to estradiol at the same concentrations. Women who harvest hops for beer begin menstruating 2 days later anecdotally. Zava has confirmed that beer has a significant amount of phytoestrogens that have moderate estrogen activity from hops used in the flavoring of beer.

Since the 1970s most of the work on cottonseed oil as an antispermatogenic has been conducted in China, after Chinese authorities noted decreased fertility in some provinces in the late 1950s and eventually linked it with the use of cottonseed oil in cooking. In one study rats fed 0.5 milliliters of cottonseed oil a day produced no viable sperm at the end of the 28-day test period. Cotton is the most intensively sprayed field crop in the world, accounting for more than 10 percent of the pesticides used worldwide and 25 percent of the pesticides used in the U.S. Yet despite cotton's role in the food chain, chemicals that are banned for use on food crops are used on cotton.

Two ingredients common in many hair- and skin-care products have been linked to abnormal development of breasts in boys. Lavender oil and tea tree oil contain compounds that act like female sex hormones and interfere with male hormones, researchers have determined.

Enlarged male breasts, or gynecomastia, result from an imbalance between the activity of estrogens, which stimulate breast growth, and estrogen-inhibiting androgens. The condition is extremely rare before puberty, says Denver-area pediatric endocrinologist Clifford Bloch.

Nevertheless, since the mid-1990s, Bloch has treated gynecomastia in a series of boys age 10 or younger. Most had normal ratios of sex hormones in their blood, indicating that theirs wasn't a problem of hormone production.

From the youngsters and their parents, Bloch learned that at least five boys had been using a shampoo, hair gel, soap, or another topical product that listed lavender oil among its ingredients. One of the products also contained tea tree oil. "A couple of patients were putting pure lavender oil on their skin," he says.

Bloch recommended that the boys stop using lavender-containing products. When they followed his advice, gynecomastia disappeared within a few months.

To verify his hunch that the plant oils were hormonally active, Bloch contacted Derek Henley and Kenneth Korach of the National Institute of Environmental Health Sciences in Research Triangle Park, N.C. In their lab, the two investigators exposed human-breast cells to lavender oil and, separately, to tea tree oil. They found that each oil turned on estrogen-regulated genes and inhibited an androgen-regulated gene.

"These oils possess both estrogenic and anti-androgenic properties," Henley reported at the Endocrine Society meeting in Boston this week. He adds that the finding is the first to implicate "essential oils" from plants in gynecomastia.

Young boys should avoid the oils, Bloch advises. Many personal-care products contain them. Other plant products act like estrogens in the body.

Pediatric endocrinologist Edward Reiter of Tufts University School of Medicine in Springfield, Mass., applauds Bloch for his "impressive, Sherlock Holmes" performance in unearthing what the boys had in common. While similar patients probably trickle in to other endocrinology clinics, he says, the cause of their enlarged breasts could escape diagnosis because doctors don't make the connection to personal-care products.

The rapid reversal of gynecomastia that Bloch accomplished is a rare achievement in medicine, comments Ken Ong, a pediatric endocrinologist at the Medical Research Council in Cambridge, England. As such, it strongly suggested a link between the products and the boys' problem.

Pharmaceutical companies routinely travel to the jungles to seek native cures. They modify traditional herbal remedies to create prescription drugs. One such example is digoxin that is derived from a traditional Irish tea and the fox glove plant. Many herbs, foods and spices have estrogen activity as well as progesterone activity. In general, if a people group has been eating a particular food for centuries and have relatively small amounts of estrogen linked diseases, the food is safe to consume in reasonable quanities.